A Special Thank-You for a Special Guy 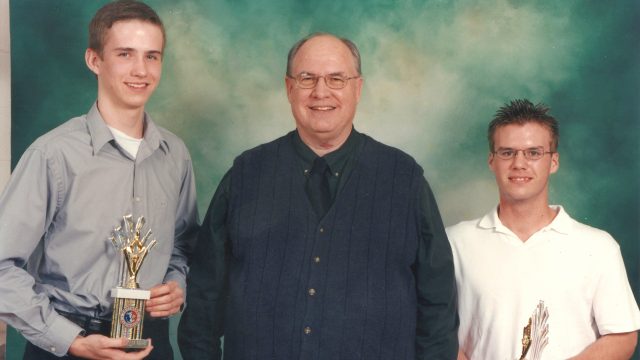 I went to the IB Program in high school—IB for “International Baccalaureate.” It’s a worldwide program that basically takes high school kids and puts them through college while they’re still in high school.

It was hard. If high school were a video game, IB would be its highest difficult setting. Four to five hours of homework per night was the norm, the courses were all advanced, regular participation with volunteer organizations was required, and an avalanche of tests waited for anyone who made it to the third year. A lot of kids dropped out. A lot more became insane workaholics as adults. (Wink, wink.)

In middle school I was a bit directionless—I liked video games and Star Wars, and that was about all I ever though about—and I think my parents saw IB as my surefire path to college. They had me apply for it, and after getting over some fear and reluctance, I accepted my invitation to attend.

I did make a few friends during my first week, and I liked the teachers well enough, but I didn’t have much of a life. Among school, church, and home, my whole life consisted of adults telling me what to do, and me doing it. I was happy—this dynamic is probably typical for a lot of kids that age—and I’m certainly grateful in retrospect that I was raised with a strong work ethic. But something vital was missing from my life, and I didn’t even know it until I found it.

I found it through my relationship with a man named Bob Eichenberg, or “Eich” as we kids called him. Eich was the TV Production teacher at my high school, with a background teaching history and a passion for theatre. I signed up for his elective on a whim, mostly because it sounded more fun than business or computer classes.

Being a quiet, good-natured kid, I found a kindred spirit in quiet, good-natured Eich, and I talked a couple of friends into switching to the TV Production elective during the first week of high school. Eich taught us the ropes of the school’s news studio, and I think he sort of took me on as a special project: the shy kid trying to find an identity. On parent-teacher night, he recommended to my mom and me that I join the Drama Club, which he ran. I did join, and made new friends there, too.

But in my mind, the first thing that really separated Eich from other teachers was an assignment he gave us a few weeks into the first semester. The assignment was this: “Take a camera, and go make a movie.” No rules, no restrictions, none of the arbitrary creative limits that college professors are so fond of. The movie we were assigned to make could be about anything; all we had to do was make it. It was like Eich, separate from most other teachers, realized we kids had imaginations. And he’d just assigned us to use them.

My friends and I decided our movie would be about a superhero with the power of a magic red hat that stunned people when he threw it at them. Amoeba Man was born. He had nothing to do with an amoeba—we just thought it was hilarious to give him a random name. The movie was terribly stupid, but it was our movie. And when we showed it to the kids in our other classes, they actually liked it. I’d discovered that I could make creative things, express myself through art, and use that expression to connect with other people.

What I’d discovered was individuality. That was the special ingredient my teenagehood had been missing. Suddenly, life was more than just a long set of rules I had to follow and assignments I had to complete. With help from friends, family, and teachers, I could chart my own course through life. I could express myself by creating things that mattered to people other than me.

Now, I’d always had a creative streak. I wrote little mini-books and a bunch of goofy songs as a child. But I have no doubt that Eich’s single open-ended filmmaking assignment changed the course of my life. It led me to fall in love with filmmaking, and with the arts in general.

I can’t guarantee I wouldn’t have stumbled into the arts without Eich in my life, but there’s quite possibly a parallel universe where I never met Eich, majored in business, closed my mind, never opened a book again, and lived a much more boring, much less purposeful life.

Eich was due to retire at the end of my freshman year, but the school needed a media specialist, so Eich stayed on through my junior year, though not as the TV Production teacher. My friends and I made three more Amoeba Man movies and took four more TV Production classes, eventually becoming the school’s resident A/V geeks. And Eich was always there in the library, eager to offer advice, happy to lend an ear when we needed someone to talk with.

When I decided I wanted to go to film school, my parents were quite understandably worried. Would I be able to make a career in the arts? Should they let me follow my dreams, naïve though they were? I didn’t learn until years later that my mom actually met with Eich to ask him for his thoughts, and he encouraged her to let me go for it. Though hesitant at first, my parents become completely supportive of my choice.

I congratulated Eich upon his retirement and he congratulated me upon my graduation. Eich’s decades at the school had earned him a legendary reputation, and the school named its media center after him, with an official sign above its doors.

Eich and I’s relationship didn’t end there. Our teacher-student relationship may have faded, but we’d become friends, so we kept in touch. We started a tradition of meeting up to see an Oscar-nominated film every year, no matter where I was living at the time—a tradition we still continue to this day. Eich has made cameo appearances in two of my movies, too: once in a wannabe goth film that I never finished, and again in my graduate thesis film, a feature-length ordeal that I’m still working on. We’ve even developed some friendly (I think they’re friendly!) disagreements about politics, with occasional Facebook debates on each other’s timelines—I actually enjoy debates, if you can’t tell from literally every other post on this blog. Eich and I agree more than disagree, though. 😉

I hope everyone has that one teacher who made a difference, because I can’t imagine my life without the teacher who made the most difference to me. Eich’s always been there for me, offering guidance, helping with my creative projects, and just being a great friend and mentor. So it’s no surprise that the dedication of my newest book, a sci-fi crime thriller called Dead Links that deals with the future of the entertainment industry, reads as follows:

“For Bob Eichenberg, who opened the door for me to fall in love with storytelling, encouraged me at every stumble as I was first learning my craft, opened my eyes to the power of fiction, and taught me that with such a great power comes great responsibility.”

Thanks, Eich, for everything.

5 comments Categories: Uncategorized
« Futurism Is Awesome
Dead Links and the World of Tomorrow »

5 thoughts on “A Special Thank-You for a Special Guy”