Dead Links and the World of Tomorrow 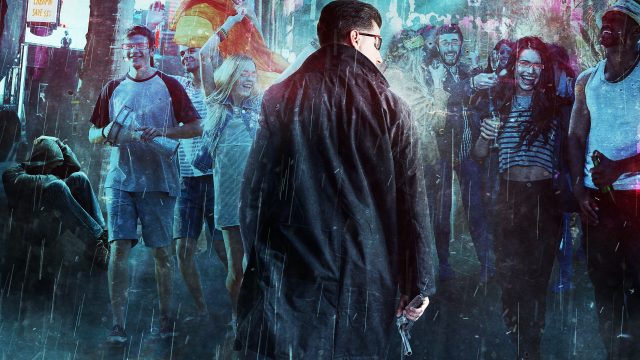 The future is impossible to predict. But that hasn’t stopped futurists, and sci-fi writers like myself, from giving it a good try. Sometimes we even get it right.

In my new murder mystery book, Dead Links, I paint a picture of one possible future in 2038, twenty years from now. My first duties were to my story and to my thematic material, so the accuracy of my futurism had to take a back seat to them. I built the story world first for storytelling impact, and second for accuracy.

But after reading the finished book, I was surprised at how closely the book’s world aligns with my actual views on what the United States will be like twenty years in the future.

Self-driving cars and 3D printers will be ubiquitous, of course. They were the low-hanging fruit in my worldbuilding, and a ton has been written about them.

And the story takes place in Los Angeles, which is experiencing an intense heat wave and drought during the story—a climate many of us will have to start getting used to. Also low-hanging fruit.

Much of the story centers around the entertainment industries, which will have changed considerably by 2038. Desktops, laptops, and phones will have been mostly replaced by glasses, which will themselves be replaced by contact lenses that let us experience all of our digital information virtually, from any location. In fact, the entire internet will start to take physical form around us. Pop-up ads will become pop-up people, modelled after our closest friends on Facebook. Ads might be printed on all surfaces, and some might even aggressively pursue you. The government will probably create new restrictions on ads, so overwhelming will they be.

We’ll meet up with friends, hold conferences with coworkers, and play out our favorite stories and games in a virtual world that’s overlaid on top of the real world. If you’ve never read Ready Player One, I highly recommend it for both its amazing story, and its depiction of what life might be like in a world where the virtual matters just as much as, if not more than, the physical. (I nodded to that book with brief mentions of “GameWorld” and “netsuits” in Dead Links.)

I think this new entertainment technology will result in the death of film as a pop art form. It won’t die completely, but it’ll become more like the theatre is today, with tickets going for $150 a pop and only an older, urbane crowd attending. When my characters go to a “movie theater” in the book, they sit in special chairs and put on special headsets for a virtual, partially interactive entertainment experience—nothing we would think of as a “movie”. The cutting edge of pop storytelling will leave the TV and film worlds behind.

Computers will talk to us in voices indistinguishable from human speech. Any time you call a company over the phone (or rather, your glasses), you won’t know whether or not you’re talking with a human. We won’t have true, generalized AI that can think at humanity’s level, but many machines will be able to pass the Turing Test. Alan, a character in my book, even “dated” a computer program named Lexi Kitten, a semi-intelligent piece of software created for lonely men. Most of the time, Alan could fool himself into thinking he was in a relationship with a real person’s mind. (The equivalent product for lonely women will also exist in the future.) Software like this has interesting social consequences, too, but I’ll get to those in a minute.

To interact with all this dazzling technology, characters in the book have ubiquitous chips implanted in their heads. They use these chips to open doors, check their bank accounts, send friends a text message, all with mere thoughts. No touching of buttons is required.

For me, the idea of chips in heads started out as a story contrivance. I thought it was pretty far-fetched that people would voluntarily get brain implants just so they could more conveniently interact with technology. But over the course of writing the book, I became less sure of this. Keep in mind, much of our lives in the future will be lived in a virtual world. As our dependence on this world grows, the pressure to lubricate our interactions with it will increase. It will become more and more inconvenient not to have a chip in our heads. I don’t think the tech will get to the level where it can actually record our emotions or interact with our memories (both of which happen in Dead Links)—at least not for many, many decades—but I’d put my money on simple brain implants at least beginning to get popular by 2038. Memory erasure, another plot staple of my book, is already being tested in labs in real life in 2018. By 2038 it too will likely be a reality.

With brain implants comes a whole lot of potential for abuse of power. It’s bad enough that corporations and governments mine data from our cell phones; when the tech is put inside our heads, the surveillance will only get worse. In fact, with the “internet of things” coming online, and everything from household thermometers to sex toys getting connected to the world wide web, powerful organizations will have access to more data—and more personal data—about us than ever before. We’ve given them no reason not to. Privacy laws are lax, with the population at large giving the whole issue a big shrug. Some tech leaders even declare that privacy is dead, and then work to make it so.

Security cameras will be everywhere, even in rural areas. Insect-sized drones will make the cameras mobile. Drones themselves will take over many of today’s jobs, especially in the transportation and shipping industries. I think drones will cause a revolution in crime and law enforcement, too… but that’s a different blog post.

Authoritarianism will be a threat, from corporations as well as the government. I only hint at this in Dead Links because it’s not the central subject matter of the book, but at certain points in the book we learn that the powers that run the world have some truly scary capabilities. Guy, the private detective who is the main character, uses Google Live View to find anyone he’s looking for. This is a literal live overhead view of the world’s major cities, streamed live into Google Maps from satellites in space, and it’s freely available to the public, and to any unscrupulous organization that wants to use it to spy on whoever they want in real time. Guy uses it… but so do stalkers, and the mafia, and corporate customer-tracking algorithms.

At one point in the book, the authorities decide that Guy is a bad guy and needs to be apprehended, so the city’s entire infrastructure—its internet of things—turns against him. His car stops and locks him inside itself. When he escapes, ads around the city warn him to desist, because he’s wanted by the police. Armed police drones chase him down long before the actual police arrive. (And enthusiasts on the internet are watching all of this on Google Live, hoping Guy gets caught!) All of this technology will exist in real life in the future.

The social and political consequences of all this technology are what I’m most concerned about. An escapist dystopia lurks in the background of Dead Links, where we’re all so glued to our virtual world that we’ve let the real one crumble—and I’m not just talking about infrastructure and environment. In this story world, we’ve all become hyper-consumerist and hyper-individualist, isolating ourselves from each other and from any hope for personal or communal growth. We seek to solve our problems not by confronting them or by making any needed changes to our lives and society, but by running from those problems as fast as we can into a never-ending playground of better and better tech and more immersive entertainment experiences. The tech itself, as Guy points out in the story, isn’t the problem. The problem is the Zuckerbergian, Kurzweilian (and Orwellian?) fantasy that better tech will solve all our problems without us having to fundamentally change our ways of thinking. This two-facedness of technology—specifically as it relates to the entertainment industries—is a central theme of the book. Does a computer program like Lexi Kitten help lonely people, or does it isolate us from forming relationships with each other and exacerbate harmful gender stereotypes? Is a gizmo like the Omni—a heavily marketed product in the book that amounts to nothing more than synced TV screens covering each wall of a room—a necessary consumer good catering to a legitimate market demand? Or has that demand itself been manufactured, and products like the Omni are vain distractions from more urgent, loftier endeavors we should be focused on instead?

The book asks these questions and many more, and I genuinely don’t know the answers to most of them. But I do want us to adopt a cautious approach as technology takes us ever further away from the type of small, close-knit, tribal society we evolved to live in. No doubt Kurzweil would call me a Luddite, but Dead Links does illustrate my awe as well as my caution.

I was actually fairly conservative in my predictions for the future in this book, because too often sci-fi writers get carried away with singularitan flights of fancy, imagining we’ll have a space civilization by 2001 or flying cars by 2015. But the world is changing, and the rate of that change is increasing. I think the real world will change more than my book imagines it will by 2038.

We as a species are traveling into vast uncharted technological territory. Let’s keep thinking and talking about it. Let’s be careful.

No comments yet Categories: Uncategorized
« A Special Thank-You for a Special Guy
The Expanding Circle of Empathy »