Murder Fix: The Most Dangerous Trope in Fiction 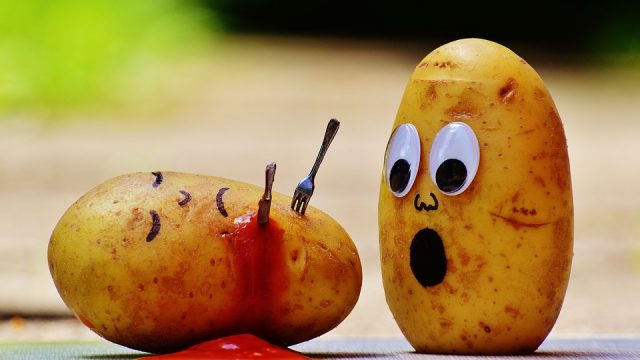 If only we could kill all the worst, most evil people in the world, would the world be a better place? If we ask the entertainment industry, the answer is a resounding yes. The ultimate fix for all of the world’s problems, according to many of the most popular TV shows, movies, and books from the last half-century, is simply to kill the villain. This trope is so prevalent in fiction that we accept it at face value, but it’s high time that we name it and hold it up to scrutiny. I call it the “Murder Fix.” It’s one of the most harmful false ideas we put in our entertainment.

From The Lord of the Rings to Harry Potter to almost every animated Disney movie, the hero’s goal is the same. In order to save their loved ones and protect the world as we know it, the villain must die. Nothing else needs to happen to fix the world—just the villain’s death (or maybe the death of the villain’s whole team).

The economic and political systems the villain had created, and the downstream effects they had on the rest of society? Immediately forgotten upon the villain’s death. The tremendous social influence the villain wielded while in power, and the social environment that propped them up? Gone immediately when the villain dies. In stories that end with a Murder Fix, it’s like God’s eraser descends on the world to wipe away any lasting effects of the villain’s reign. True, a few heroes may have sacrificed themselves along the way, but all the bad things that happened are in the past. Murdering the villain fixed the world. The future will now be blissful and idyllic.

No recent example of the Murder Fix is more barefaced than the Murder Fix at the end of the Star Wars sequel trilogy. After J. J. Abrams had set up Supreme Leader Snoke as the trilogy’s main antagonist, Rian Johnson shocked audiences by killing Snoke off halfway through the second film. The original Star Wars trilogy ended with a Murder Fix: Emperor Palpatine’s death led to the immediate collapse of the Galactic Empire—and presumably an end to all of the heroes’ problems at the time.

Audiences expected Snoke to fill the same role in the new trilogy, so when he suddenly died, Star Wars’ story structure went deliciously off the rails into new, exciting territory. Who was the villain now? Surely not Kylo Ren, who was on track for a redemption arc. Could it be that we were about to see a more ethically complicated and challenging Star Wars, in which the primary villain had some good in him, yet still did awful things? A Star Wars that examined recovery from intergenerational family trauma and the lasting devastation of empire through an inquisitive rather than a vengeful lens?

Sadly, we were not so lucky. The Rise of Skywalker’s creators apparently could think of no way to drive their story forward without a villain to kill to make everything right again. They knew they couldn’t bring Snoke back after such a memorable death scene, so at the very beginning of the third film, they inexplicably returned Emperor Palpatine from the dead. Palpatine had had nothing to do with the Star Wars story since Return of the Jedi, but featuring morally gray Kylo Ren as the villain, with the morally complicated story resolution that would surely follow, was too much of a risk for the film’s creators. So they brought back Palpatine for no other reason than to have a villain for the heroes to kill at the end, to restore peace and justice to the galaxy.

This is where the entertainment industry is at right now. We’ve been so conditioned to expect, accept, and even to want Murder Fixes at the end of our stories that we can’t even think of other ways to resolve our plots. Even in my own writing, I find that my story outlines sometimes default to Murder Fix endings, and I need to work against my own bias to find more creative, meaningful resolutions. I sometimes need to rewrite scenes to ensure the defining trait of my heroes’ heroism isn’t their ability to persevere until they can murder someone who “deserves it.”

I say “murder,” but the villains in most of these stories aren’t usually murdered outright. Often the heroes kill them in self-defense, or the villain inadvertently causes their own demise. The key feature of the Murder Fix is the fix, not the murder. All problems in the story world suddenly vanish after the villain’s death.

Why is this idea harmful? For starters, it vastly oversimplifies a complex world by assuming that bad people are the cause of bad societies rather than a result of them. The real-life determinants of bad behavior are numerous and nuanced. In real life, bad people become bad due to a myriad of social influences, not due to some intrinsic “evil” quality they possess. Killing a bad person in real life solves none of the problems that caused them to become bad in the first place. Genetics is admittedly a factor in bad behavior, but since we have little control over our own genes, it’s hardly just to hold a villain responsible for theirs. As evidence mounts that most criminals can be rehabilitated and as we learn that different societies define crime in different ways, some of which may be highly unethical, it seems increasingly inhumane to punish bad people as harshly as we do.

It would be one thing if the Murder Fix was confined to the world of entertainment. But the idea that killing or punishing the right people will solve all of the world’s problems is also pervasive in government policy. Most of the world’s criminal justice systems focus on retribution, which inflicts pain, increases recidivism, and does nothing to tackle the root causes of crime to prevent future crime from occurring. The United States’ approach to fighting terrorism has also been just as naïve as the screenplay for Star Wars: The Rise of Skywalker: “Kill the terrorists, and there will be no more terrorism.”

It’s unclear whether the entertainment industry is reflecting government policy, whether government policy is being influenced by generations of indoctrinating storytelling, or whether both are responding to a deeper cognitive bias embedded in our brains that urges us to label people as irredeemably evil and then destroy them.

What is clear is that Murder Fixes distract us from the systemic problems that are the true sources of most of the world’s suffering: systemic problems that are nowhere near as easy or sexy to solve. When we should be focusing our energies on how governments and corporations relate to each other, how election systems function, how to spot embedded structural biases, how diplomatic relations can succeed, and what the most important problems are in the first place, we instead focus on retribution. If we can just kill the right terrorist, if we can just lock the right people behind bars, if we can just get one person out of office, then the world’s problems will supposedly, miraculously recede, and we’ll then be able to return to our normal lives, ignoring the problems that don’t affect us personally.

Systemic problems can be extremely complex and difficult to solve, but a quick search of the internet reveals an army of researchers and policymakers who have written piercingly insightful think pieces about these problems and crafted ingenious solutions. For the entertainment industry’s sake, I’d like to add a solution of my own: Let’s stop writing and celebrating Murder Fixes, and start writing and celebrating stories that subvert them. Less Star Wars, more Star Trek.

Plenty of great stories are able to resolve themselves without Murder Fixes. (Spoiler warning for some stellar stories.)

Avatar: The Last Airbender directly confronts the Murder Fix trope by making the dilemma of whether or not to kill the bad guy central to the series’ climax. It asks us to consider whether an eye-for-an-eye killing of even a very evil villain is ethical.

Spider-Man: No Way Home goes even further, with Peter Parker fighting against his own ally to save the villains’ lives and rehabilitate them.

Other stories, such as Joker and The Wire, use bad people to turn a mirror on the society that created them.

Sometimes, the hero triumphantly succeeds at a Murder Fix, only to realize that their own side has become just like the very villain they killed, and nothing has changed—like in The Hunger Games and Game of Thrones.

Stories like The Martian, Interstellar, and Annihilation show that stories don’t even need a villain in the first place: characters struggling against adverse circumstances can be just as engaging.

When there is a villain, the heroes and villains can simply work out their differences or change their minds at the end, with no sacrifice of conflict or excitement, as happens in The Good Place, Serenity, and often in Lois McMaster Bujold’s brilliant Vorkosigan Saga.

Cloud Atlas portrays the harm to both individuals and society when we vilify and destroy each other. Even when that story’s villains do get their comeuppance, it’s only after the heroes have learned the hard way that retribution and destruction aren’t the most productive paths forward.

Sometimes we ourselves are revealed as the villain, as in Ex Machina and Dark.

Society itself can also serve as a powerful villain that must be defeated through means other than violence. Ursula K. Le Guin and Margaret Atwood are masters of this type of story.

There are also entire genres, of course, that tell intensely engaging stories without the need for physical conflict at all. Romance and erotica are two of the highest selling fiction genres.

And this is just the beginning. A plethora of other story endings besides the Murder Fix exist. It’s time to end our reliance on this lazy and regressive trope. Let’s stop telling stories that focus solely on having enough grit and determination to solve problems whose solution is already clear—kill the villain—and start telling stories about how else we can solve problems. The world desperately needs such stories right now.

No comments yet Categories: Uncategorized
« We Win More Arguments When We’re Kind