What I Want to Do 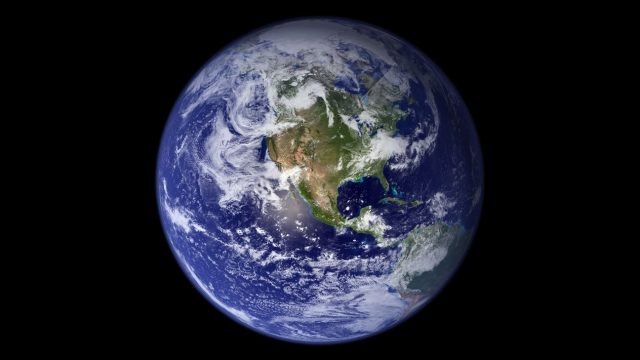 Just look at that! Isn’t it incredible?

It’s not a digital painting created inside a computer. An actual human being sent an actual camera up into actual space, turned it around, and snapped this actual photograph—or rather, several photographs that were composited together to make this image. If you lived in North America at the time it was taken, then there you are somewhere in this picture. (Unless you chose to hide beneath a cloud, silly you.) This blue orb is a real, tangible place.

And so is that black space behind it.

When you look at a photo taken from much farther away, or at an incredible scale model of the solar system, you start to get a sense that the Earth is extremely small. Your body is the same size compared to Earth as Earth is when compared to the whole Solar System.

So the Solar System is unfathomably huge. I can’t even comprehend a distance that big. But then I look at this picture: It’s a visualization of the Milky Way galaxy. (You can’t take a real picture from outside of the whole thing like this, because we haven’t been outside of it… yet.)

You can only see the very biggest, brightest stars. Everything else, including our own Sun, is just a luminous blur. Our sun is so tiny in this visualization that you can’t even see it. On this scale, the Sun is microscopic.

As if that doesn’t blow my mind enough, there are also images like this (credit to Andrew Pontzen and Fabio Governato at UCL): Every single dot in this visualization represents an entire galaxy. And yet this breathtaking image details a space that’s only 0.0005% of the observable universe.

And that is a space that’s unspeakably vast. The amount of the universe that we can observe is 93 billion light years across. We can’t see any farther than that because not enough time has elapsed since the beginning of time for light from farther away to reach us. At this scale, you and I aren’t even as big as germs are to us. We’re not even as big as atoms are to us. We’re almost literally nothing.

But look again at the blue orb at the top of this post. As small as it is, and as small as we are, that blue planet is the only place we know of in the whole universe where people have read books, eaten pizzas, or fallen in love. In all that blackness out there, Earth is the only place we know of where life exists, and the more we learn about the universe, the rarer life seems to be.

Some people might look up at all that blackness in the sky and worry at how tiny and unimportant we seem to be. But I see things the opposite way. I think all that emptiness in the sky makes human beings indescribably important. For all we know, we could be the only self-aware, reasoning beings for tens of thousands of light years in any direction—and maybe (though less likely) the only self-aware, reasoning beings anywhere, period. It boggles my mind how much I don’t know, and how much we all don’t know, yet we very well may be the only repository of knowledge in the entire universe. Like Carl Sagan said, we are a way for the cosmos to know itself.

When we look up and outward at the space that surrounds us, how unique we are! How important it is that we get it right, this human enterprise. If we screw up our planet or our future, we’ll be extinguishing a brilliant lighthouse, shining like a beacon in a lonely, stormy sea. But if we make the right choices we could prosper, spreading out to the cosmos, to other worlds just as real as ours—so real that you could send a camera to take a picture of them, just like that opening picture of you and me and the clouds.

I want to be part of that getting it right.

In whatever small ways I can contribute, my goal with my books, and with my life in general, is to help turn society’s rudder and steer us human beings toward the best possible future. I want a future where we all treat each other ethically and empathetically, where freedom is balanced fairly between individuals and their societies, where we continue to seek truth instead of assuming we already know everything there is to know. I want to avoid thinking dogmatically, be it about politics, religion, philosophy, or anything. I want to admit when I’m wrong and change when I need to, and I want society to do the same. I want us all to ask questions, to challenge assumptions, to scrutinize everything. I want us to stop fighting each other and start cooperating so we can build a prosperous future together. I want to grow—intellectually and morally—and I want to help society grow, too.

I want to keep humanity’s lighthouse shining brightly. That big blue ball that we call Earth? That’s ours. We have a great responsibility to protect it, and to care for all beings that live on it. I intend to do just that.

I hope you’ll join me.